The initiative to change from paper to polymer for the 20-baht banknotes is to improve their quality, making them cleaner and more durable. As the 20 baht is the most widely used denomination, it is therefore prone to being more worn out and soiled than other denominations.
The 20-baht polymer banknotes maintain the same theme of design and features as the current 20-baht paper banknotes in circulation. Advanced anti-counterfeit technologies ensure that the new polymer banknotes are difficult to counterfeit. The additional, new security feature is the clear window. The lower clear window exhibits color-shifting ink that shifts from translucent yellow to red. For the visually impaired, the small numeric "20" is embossed in the clear window, which can be easily touched and felt. 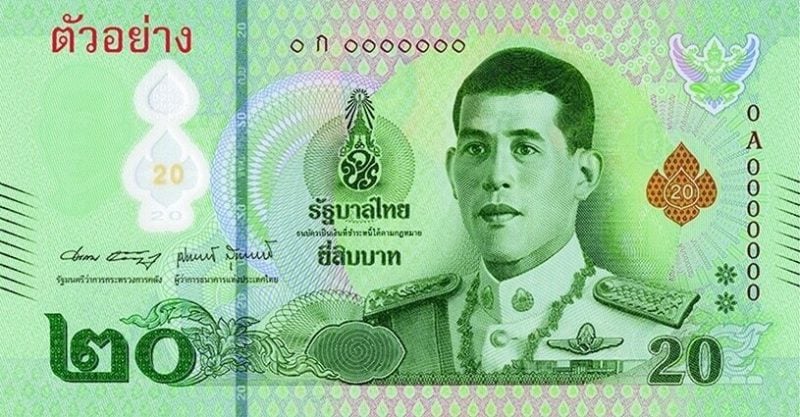 The obverse of the bright green banknote shows a portrait of Vajiralongkorn (Rama X), King of Thailand, in his Royal Thai Air Force uniform. Vajiralongkorn, born "Vajiralongkorn Borommachakkrayadisonsantatiwong Thewetthamrongsuboriban Aphikhunuprakanmahittaladunladet Phumiphonnaretwarangkun Kittisirisombunsawangkhawat Borommakhattiyaratchakuman" (Thai: วชิราลงกรณ บรมจักรยาดิศรสันตติวงศ เทเวศรธำรงสุบริบาล อภิคุณูประการมหิตลาดุลเดช ภูมิพลนเรศวรางกูร กิตติสิริสมบูรณ์สวางควัฒน์ บรมขัตติยราชกุมาร) on July 28, 1952 is the only son of King Bhumibol Adulyadej and Queen Sirikit. He ascended to the throne in 2016 upon the death of his father. Vajiralongkorn's three-day coronation ceremonies took place from May 4 to 6, 2019. The national emblem of Thailand, the Phra Khrut Pha, portraying the mythical creature, Garuda, appears in the upper right.

The reverse of the banknote prominently shows Rama I (Phra Phutthayotfa Chulalok Maharaj, 1737-1809) and Rama II (Phra Phutthaloetla Naphalai, 1767-1824). The national emblem of Thailand appears in the upper left.
The new 20-baht polymer banknote is printed by De La Rue plc on both CCL Secure's Guardian™ substrate and De La Rue's SAFEGUARD® polymer substrate.
The banknote measures 138 x 72 mm, similar to its paper predecessor. The new 20-baht polymer banknotes are signed by:
- Arkhom Termpittayapaisith, Minister of Finance (left)
- Dr. Sethaput Suthiwartnarueput, Governor of the Bank of Thailand (right)
and will be issued on March 24, 2022 through all banks' branches. The 20-baht paper banknotes will remain legal tender. 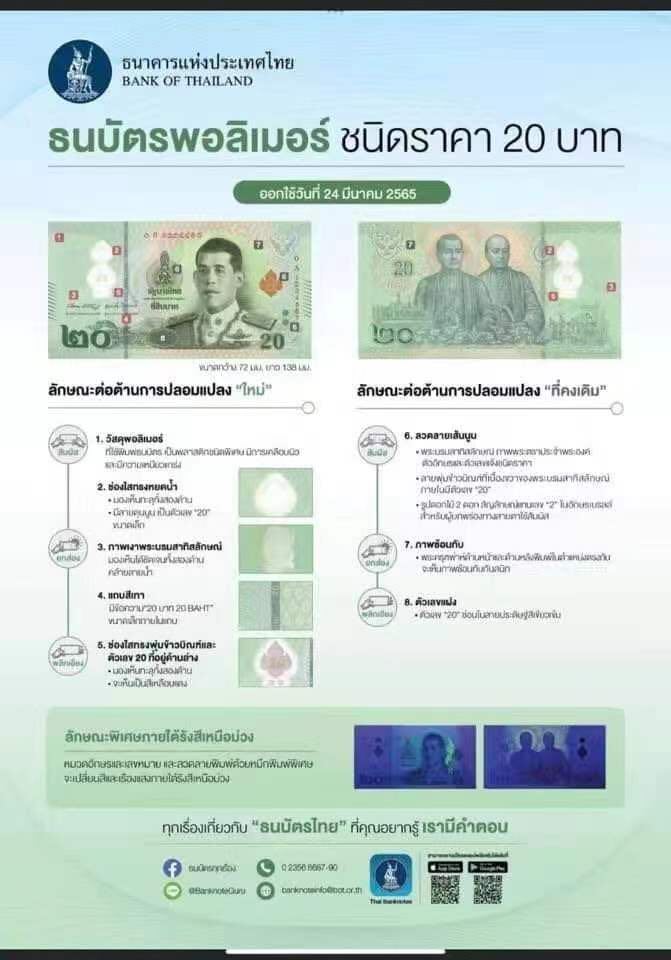 Previously, the Bank of Thailand had issued two circulating 50-baht and one 500-baht commemorative polymer banknote. The bank discontinued use of polymer, but due to current, advanced technology, the print quality and durability are much better than before. It is planned to switch the other denominations to polymer as well.
Buy the banknote here: Thailand S4R1b
Blog