A collective of design agencies from Scotland's creative industries scene played a central role in the Royal Bank of Scotland's pioneering "The People's Money" banknotes: the "Fabric of Nature" family of notes. This current series of polymer banknotes comprises four denominations, all printed on De La Rue's Safeguard® polymer substrate:
- £5 picturing Nan Shepherd, Scottish novelist and poet, issued on October 27, 2016, additionally representing Scotland's seas (Atlantic mackerel).
- £10 picturing Mary Somerville, Scottish science writer and polymath, issued on October 4, 2017, additionally representing Scotland's waterways (Eurasian otters).
- £20 picturing Kate Cranston, a leading figure in the development of tea rooms, issued on March 5, 2020, additionally representing Scotland's woodlands (Eurasian red squirrels).
- £50 picturing Flora Stevenson, Scottish social education reformer, issued on August 18, 2021, additionally representing Scotland's skies (Scottish ospreys).
The design concept for the family of notes drew on suggestions gathered from the public and used a range of specially designed color palettes, bespoke tweed patterns and typefaces. While the series has a narrative of sorts, when together, though, each note tells its own story: four different tweed patterns are used to reflect their denomination, and poetry is featured to connect the visual elements that reference the Scottish landscape and its wildlife.
Nearly 30 different designers were involved in the project, worked on by Glasgow studio Timorous Beasties (TB), Edinburgh-based service design consultancy Nile, Glasgow interior design Graven Images, branding agency O Street and Glasgow interior design practice Stuco Design. Timorous Beasties was tasked with illustrating elements of the Scottish natural world: mackerel, otters, squirrels and ospreys.
Taking a detailed look at the £50 banknote, as an example: TB director, Alistair McAuley, drew the illustration of the pair of ospreys in flight. TB worked once again with its friends at O Street, who handled creative and graphic design, Jeni Lennox at design consultancy Nile and Stuart Kerr at Stuco Design, while De La Rue took charge of specialty printing and photography, as they also did with the previous denominations.
Susi Leiper did the calligraphy on the reverse sides of all denominations. She lives and works in Edinburgh, as both painter and calligrapher. She exhibits widely, has won several awards and her work is in many renowned collections including the National Library of Scotland, the British Museum and the Royal Collection. The calligraphy style is Scottish Secretary Hand, a style of writing employed in Scottish offices during the XVI and XVII centuries, replacing the previously dominant "book hand" as a more legible, faster written style better suited to the growth of national and international communication in business and law.
Fluorescence is frequently used to make the process of counterfeiting more difficult, especially when used in conjunction with other security features. Using a UV light, fluorescent ink can reveal words, patterns or pictures that may be visible or invisible under normal lighting. RBS' "Fabric of Nature" series uses fluorescence most innovatively and ingeniously, let us take a closer look:
Fluorescence on the £5:
Obverse: The serial numbers, the number "5" surrounded by five midges, a mackerel in a rectangular box and various parts of the background design.
Reverse: The dorsal markings of two swimming mackerel and the English translation of the excerpt from the poem, "The Choice," by Sorley MacLean: "I walked with my reason, out beside the sea." (The Gaelic lines, "Choisich mi cuide ri mo thuigse a-muigh ri taobh a’chuain", are featured in the visible layer.) 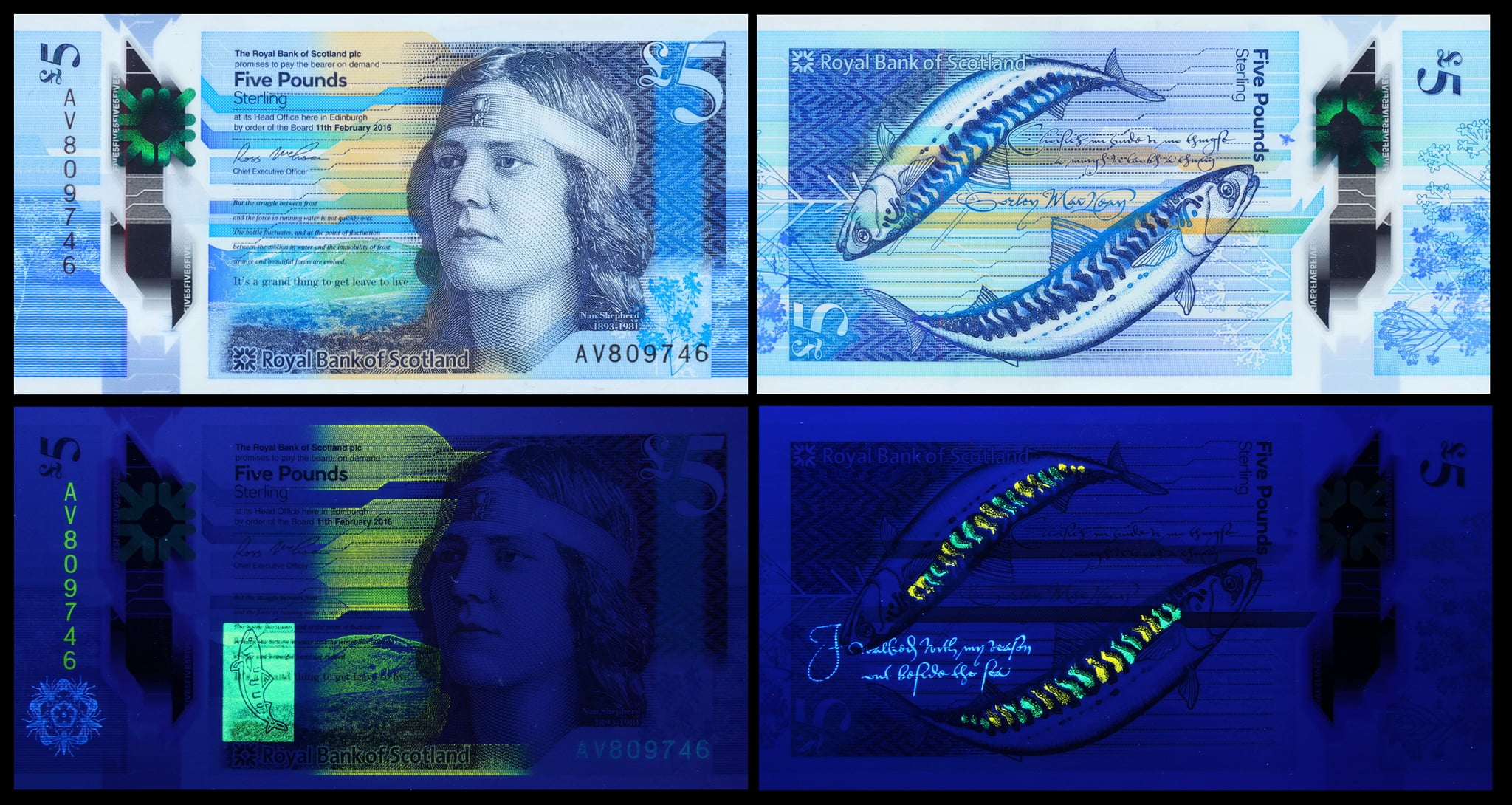 Fluorescence on the £10:
Obverse: The serial numbers, the number "10" surrounded by five midges, an otter in a rectangular box and the Moon diagram, taken from Mary Somerville’s book, "Mechanism of the Heavens," where it illustrates how we can use the light of the sun hitting the moon to calculate the distance between the Earth and the Sun.
Reverse: Furry parts of the two otters at play, air bubbles in the water and excerpted script from the poem, "Moorings," by Norman MacCraig: "It's piped at, screamed at, sworn at By an elegant oystercatcher" (The two previous lines, "The cork that can't be travels - Nose of a dog otter.", are featured in the visible layer. 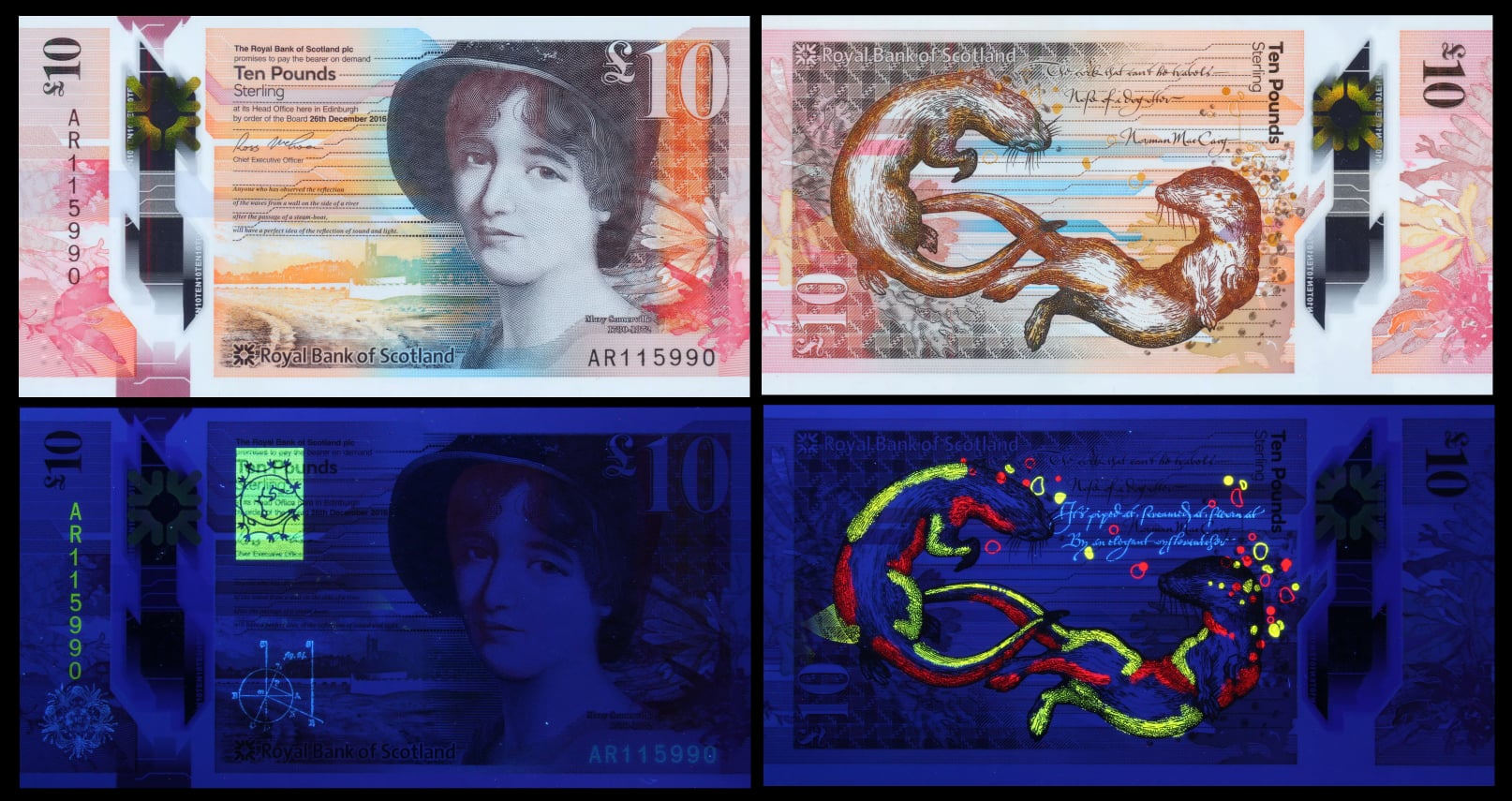 Fluorescence on the £20:
Obverse: The serial numbers, the number "20" surrounded by five midges, a red squirrel in a rectangular box, a suite of electroplate cutlery (designed by Charles Rennie Mackintosh ca. 1905 for Miss Cranston's tea rooms) and various parts of the background design.
Reverse: Two squirrels at play, a small part of a branch with leaves and two excerpted lines from Mark Alexander Boyd's work, "Cupid and Venus": "Like til a leaf that fallis from a tree, Or til a reed ourblawn with the win." (The two previous lines, "Fra bank to bank, fra wood to wood I rin, Ourhailit with my feeble fantasie", are featured in the visible layer.) 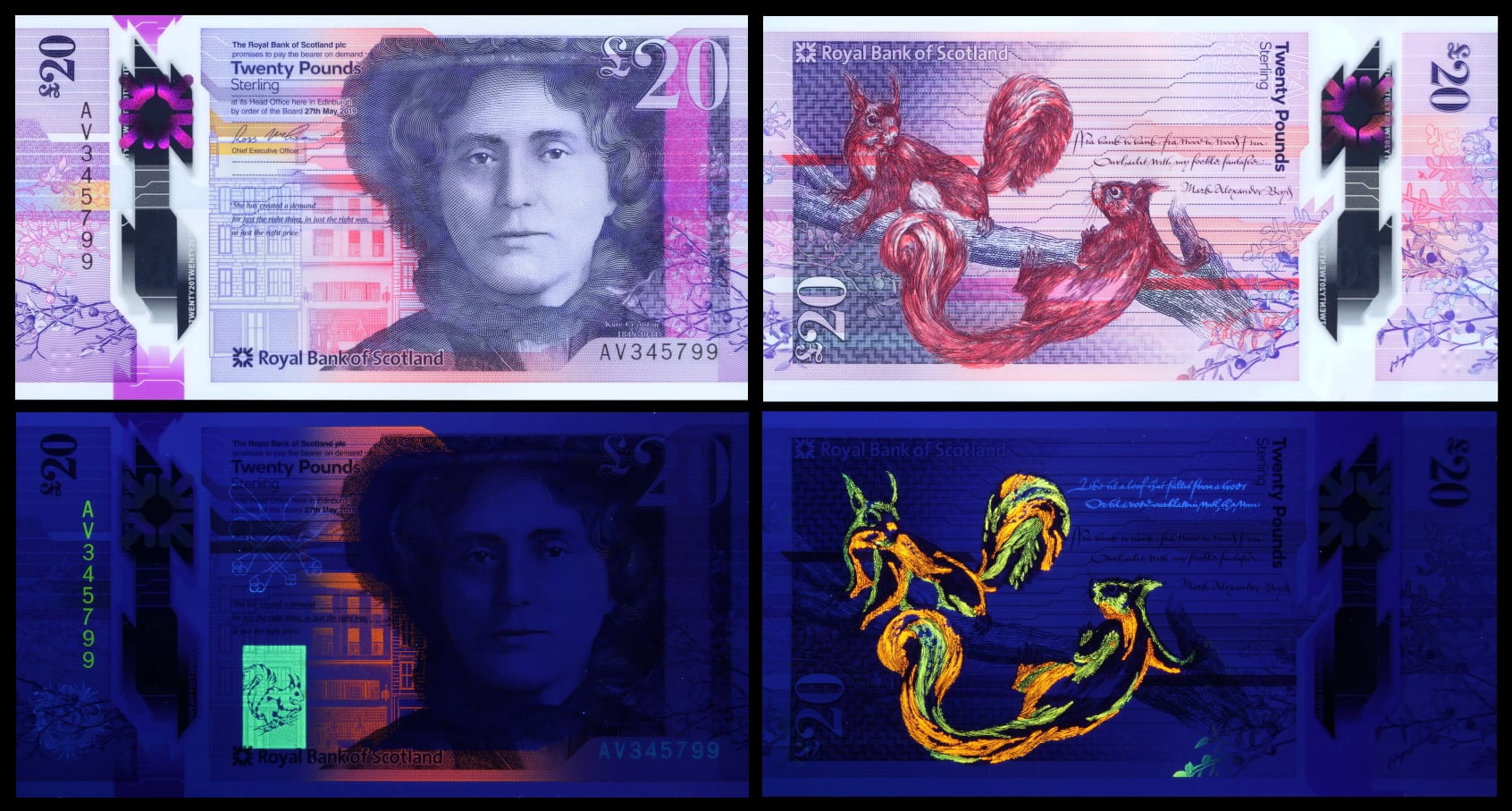 Fluorescence on the £50:
Obverse: The serial numbers, the number "50" surrounded by five midges, an osprey's nest with three bespeckled eggs inside and five gird and cleeks (a classic 19th century playground toy) on top of a pentagon.
Reverse: Two Scottish ospreys in flight, the dorsal markings of the mackerel being held in the talons of one osprey (with a "50" band on its one leg), part of the background design and a two-line excerpt from "Nettles" by Neil Munro: "The forests hum with feather, But where are now the men?" (The two previous lines, "There's deer upon the mountain, There's sheep along the glen,", are featured in the visible layer.) The use of the mackerel in the talons of the one osprey ties this note back to the first note in the family, the £5 note.