Choosing the image of Ecaterina Teodoroiu had a double significance. The National Bank of Romania shows it supports the concerns for strengthening gender equality, in line with the initiatives of other central banks in the world. Also, the NBR once again marks the fulfillment of the Centenary of Greater Romania, honoring the image of a hero of the Great War of Reunification.

A bit more about the note (from the Catalog site):

Romania, 20 Lei, issued in 2021. Front: Ecaterina Teodoroiu (1894-1917) at right, the heroine fallen in battle during World War I. A Scouts' member, she first worked as a nurse, and subsequently decided to become a front-line soldier, being deeply impressed by the patriotism of the wounded and the death of her brother Nicolae. A bouquet of crocuses (Crocus flavus) in the center, and a transparent window on the left. In the center background is a badge of the Romanian Scout Association. Back: A representation of the winged Victory on the Victory Medal, an image of the Mausoleum from Mărăşeşti, and behind the mausoleum, a fleur-de-lis. 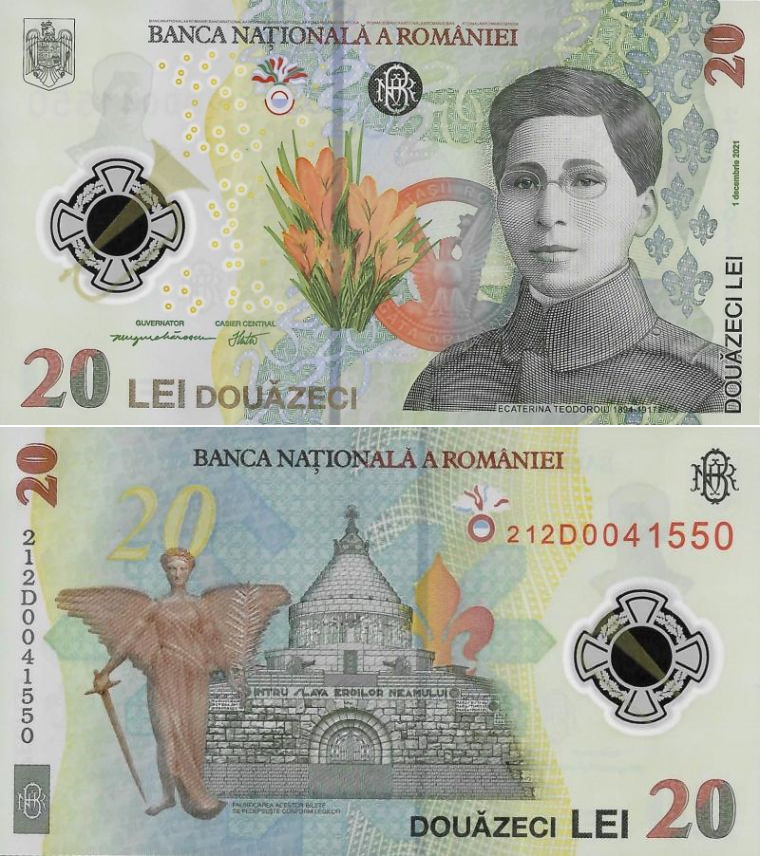 Security features of the polymer banknote include:

- A complex transparent window in the form of the "Virtutea Militară" (Military Virtue) medal, with a gold element representing a military trumpet, visible on the front of the banknote, inside which is printed the nominal value in digits "20."
- Tactile embossing on both the obverse and reverse of the banknote.
- Color-changing ink that changes color from gold to green when the banknote is viewed at different angles. The value of the banknote in letters (obverse, lower left corner) is printed with such ink.
- A latent image on the reverse: the initials BNR incorporated in the base of the image of the Mausoleum from Mărăşeşti are only visible from certain angles when tilting the banknote.
- "Watermark": When the banknote is held up to the light, on the front left side, ones sees the portrait of Ecaterina Teodoroiu and the BNR logo.
- Obverse-reverse overlapping element: a stylization of the infantry weapon insignia, located above the bouquet on the obverse and above the Mausoleum from Mărăşeşti on the reverse: the overlap happens when the banknote is held up to the light.
- The Security strip is visible on both the obverse and reverse of the banknote.
- An iridescent band on the reverse, a vertical band of golden color, incorporates the nominal value "20."