Ulster Bank will complete its current polymer series with the issuance of a £50 banknote on June 15, 2022. The design of the new £50 note was unveiled on March 8, 2022, International Women's Day 2022. The banknote heavily features women working in Northern Ireland's burgeoning life sciences industry.
The polymer banknote is a tribute to Dame Jocelyn Bell Burnell's iconic 1967 discovery of pulsars (spherical, compact objects that are about the size of a large city but contain more mass than the sun). Dame Jocelyn, who was born in Lurgan 18 miles southwest of Belfast, is considered one of the world's foremost astrophysicists. Her discovery was a sensational find: this find was recognized with the Nobel prize for physics in 1974, when Sir Martin Ryle and Antony Hewish jointly shared the prize (she was not one of the prize's recipients). Dame Jocelyn has since been a trailblazing promoter for women and the marginalized in science and was the first woman to be president of the UK's Institute of Physics, serving from October 2008 until October 2010. She was also president of the Royal Astronomical Society from 2002 to 2004 and interim president of the Institute of Physics following the death of her successor, Marshall Stoneham, in early 2011. Since Dame Jocelyn is still living, a "generic" female scientist is pictured on the reverse of the banknote. 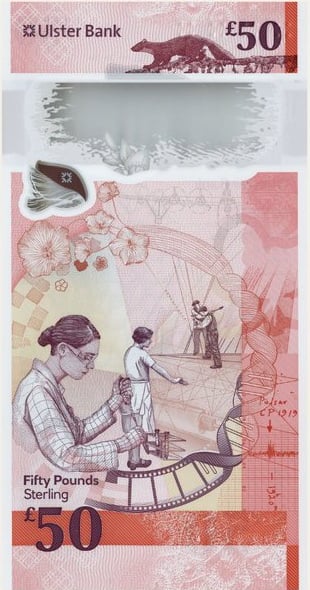 The reverse of the banknote also portrays a "Millie" (female mill worker) working at the loom, as an homage to the unsung heroes of Northern Ireland's great linen industry. These women were seen as "unskilled operatives" at the time but have since been celebrated for their skilled work. There are also nods to the shipbuilding and aviation sectors, the creative industries and Northern Ireland's place as a center of excellence in cyber security. 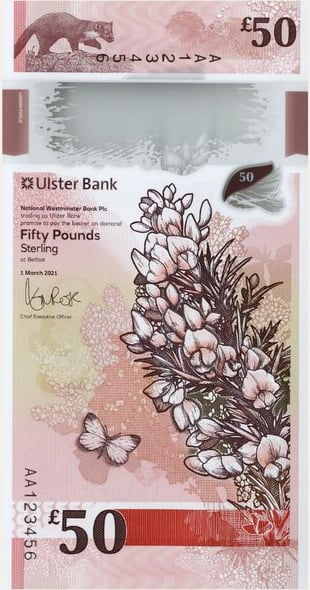 The obverse of the banknote shows a range of flora and fauna found in Northern Ireland, including a pine martin, a cryptic wood butterfly and gorse, whose thorny spines make it a corridor and safe haven for wildlife.
Press releases:
https://www.siliconrepublic.com/.../ulster-bank-banknote...
https://www.irishnews.com/.../new-bank-note-celebrates.../
Written by Donald Ludwig.
Blog